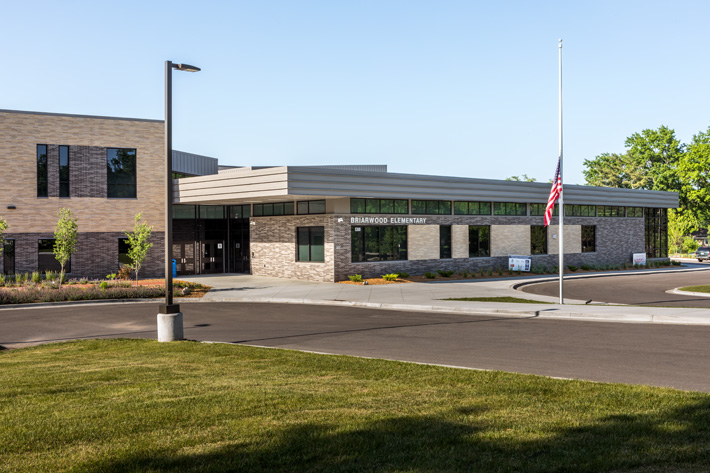 Originally constructed in 1960, Briarwood Elementary maintained its neighborhood school image well into the 21st century. Many decades and two additions later, the sprawling footprint of the building could not keep up with a growing enrollment. The design team was tasked with designing a replacement school on the same site, while improving the parent drop-off route, providing a dedicated bus lane and increasing on-site parking. Additionally, the team had to maintain a proper neighborhood context to the smaller scale neighboring houses.

The land-locked school required a complete building demolition in order to erect a new two-story facility that could effectively accommodate the growing enrollment and other school needs.

Because of its neighborhood context, Briarwood Elementary needed help minimizing its near 40’ tall presence of the classroom wing. Though the site has a natural depression from the nearby houses, norman size Glen-Gery brick were selected to help elongate the overall form rather than help elevate it.

Additionally, to add some relief on the building, every fourth course was stepped in to help further accentuate the horizontal rather than the vertical on the classroom wing. With many schools having the stereotype of red brick buildings (in addition to not many adjacent houses being red brick) the design team selected a light grey 3-way blend and a dark grey klaycoat 3-way blend. The level at which the blends change on the classroom wing is 9’-4” which represents the elevation of the eaves of the former Briarwood Elementary.

The district had an established history of success using Glen-Gery brick on multiple buildings over the years and insisted the use of Glen-Gery products again to maintain success and consistency amongst the district - a decision that did not disappoint.

While the new facility is within 3% of the same total square foot size of the former facility, the usable space to hallway ratio was significantly improved thus making the new facility better equipped for the growing enrollment than the former facility. The compact footprint and approach to traditional application of space went a long way into helping the project come in on time and on budget.